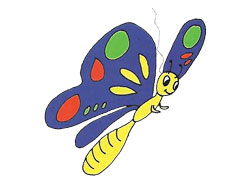 Class VI was full of transparent jars. Mrs. Rao, the science teacher, had urged the class to collect butterfly eggs and watch them turn into caterpillars, pupas and then butterflies.

Zeenat’s jar had produced a beautiful multihued butterfly while most of the others had ordinary yellow or blue garden butterflies.

Soon all the pupas had turned into butterflies and most of them had been set free.

But some students wanted to keep them for a few more days.

“I don’t think Zeenat will ever let her butterfly fly away; she’s so proud of it,” commented Vineet.

Anju rolled her eyes. They had all had enough of Zeenat’s bragging about how her butterfly had been admired by everyone who visited the class.

“We’ll watch for a few days. If she doesn’t give the butterfly its freedom, we’ll release it ourselves,” suggested Vineet.

“No. No. That’s not right. But we could try tricking her into giving it to us,” said Anju with a twinkle.

“Give me a day. I’ll think of something.”

Two days later, Anju was walking around with a jar labelled, ‘The Humming Butterfly’. Inside were some leaves and a colourful butterfly.

“I’ve never heard of a humming butterfly,” she said. “I can’t believe it actually hums.”

Anju smiled. “You haven’t heard of a humming butterfly? Listen,” she said and tapped the cover of the jar. The butterfly shook a little and soft humming could be heard.

“Wow!” Zeenat was amazed. She no longer seemed to think her butterfly was the greatest of them all.

“Will you give it to me?” Zeenat asked. “You can have mine if you like.”

“Hmm… let me think about it,” Anju said with a haughty air, and walked away with her jar. Later, Anju agreed to

Zeenat’s suggestion and the exchange was made.

Vineet and Anju giggled as they examined Zeenat’s colourful butterfly that was now theirs.

“Wait till she discovers it’s a paper butterfly,” said Vineet.

“Well, I only said it was a humming butterfly, I never said it was a real one,” giggled Anju. “I’m so glad my brother’s humming toy worked. It is still in the jar and will hum when tapped. If Zeenat looks closely, she’ll discover that my butterfly even has a smiling face!”

The two laughed as they released Zeenat’s butterfly into the air.

“Science is all around us. How can we ignore it?” Jane Walter

Organise a class ‘Science bonanza’. Ask each student to conceptualise a science experiment or exhibit. The children should be able to give a scientific explanation for what they plan to exhibit.

Pick hands-on experiments that the visitors can attempt.

Fix a date and invite the rest of the school over, to witness a show like never before!

The class will have fun and learn a lot in a day.