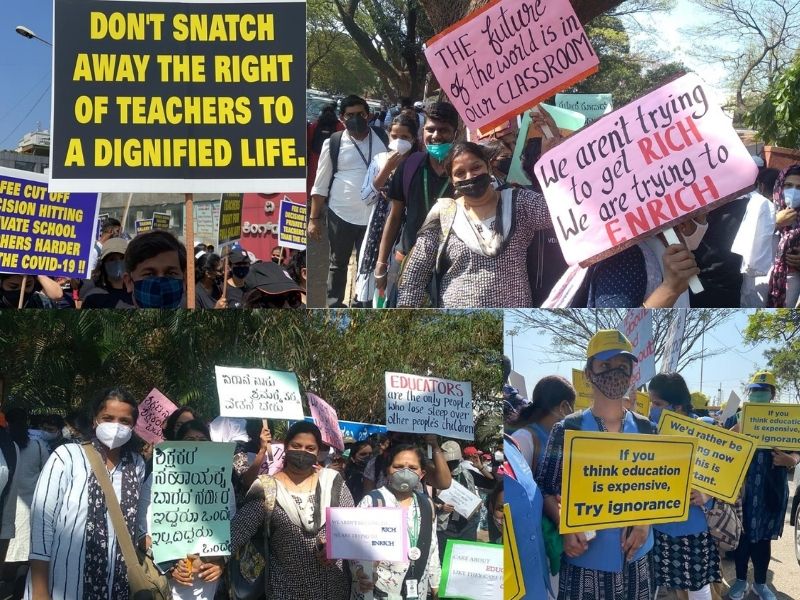 With the state government showing no signs of revoking its recent order mandating a 30 percent reduction in tuition fees,  50,000 teaching and non-teaching staff from several private schools in the state took to the streets in Bengaluru today (February 23, 2020) to voice their dissent.

Participants marched from Bengaluru Central Railway Station to Freedom Park holding eye-catching placards that displayed “Fee cut-off decision hitting private schools harder than COVID-19”, “We aren’t trying to get rich, we are trying to enrich”, “We stand for hours each day, stand for Us!’ among other slogans highlighting the current plight of private school teachers.

Taking to social media to voice her stance on the protest, Usha Mohan, director, The Bangalore School (TBS), wrote, “Each school have their expenditure and overheads. You have chosen schools according to your choice. If you think you can’t afford that school, remove your child from that school. Every schools facility is different. There are government schools too. Enroll your child in those schools. Fight with the government to give the facilities. Remember if a school is charging more it’s because of the quality education. You can’t expect quality education and extra curriculars and openly demanding for good teachers if you are going to crib about paying school fee.”

Speaking to EducationWorld, she said, “While we at TBS did not personally experience the fee tussle with parents, there were a few parents whose income had been adversely impacted by the pandemic and we accordingly offered them fee discounts on humanitarian grounds. However, I stand in support of the private schools fraternity who are rightfully protesting against the 30 percent fee reduction order of the state government. Parents and the government must understand that every school has its own expenses so a blanket fee reduction order is not feasible to implement. The state government should take cues from the recent Supreme Court verdict on petitions filed on the fees dispute by private school managements in Rajasthan. Fee discounts, where required, should be dealt with on a case-to-case basis by the school management.”

“Teachers have been more stressed than ever during the pandemic, however the government has not acknowledged their contribution,” says Mansoor Ali Khan, General Secretary, Management of Independent CBSE Schools Association. “We have voiced our concerns — including the arbitrary 30 percent tuition fee reduction without taking the school associations or the managements into confidence, the continuous harassment by government and officials of private unaided schools, witholding of RTE reimbursements — in a meeting with the government earlier but the government has decided to overlook them. Therefore, we are forced to take to the streets despite the pandemic situation. We were glad to see teachers  turning out in large numbers to make this protest march a huge success. We sincerely hope the government considers our plight and revokes the fee reduction order which is likely to drastically impact salaries of private schools staff.”

Notably, the state’s primary and secondary education minister S. Suresh Kumar visited the protest venue and promised to hold another round of discussions with parents and private school managements to resolve the fees dispute.

Meanwhile, several parents associations across the state have warned of a counter-strike if the school fee order is revoked.

With the participating schools unable to hold online or offline classes today due to the rally, several schools have decided to hold compensatory classes on Saturday (February 27) to ensure minimum disruption in academics. 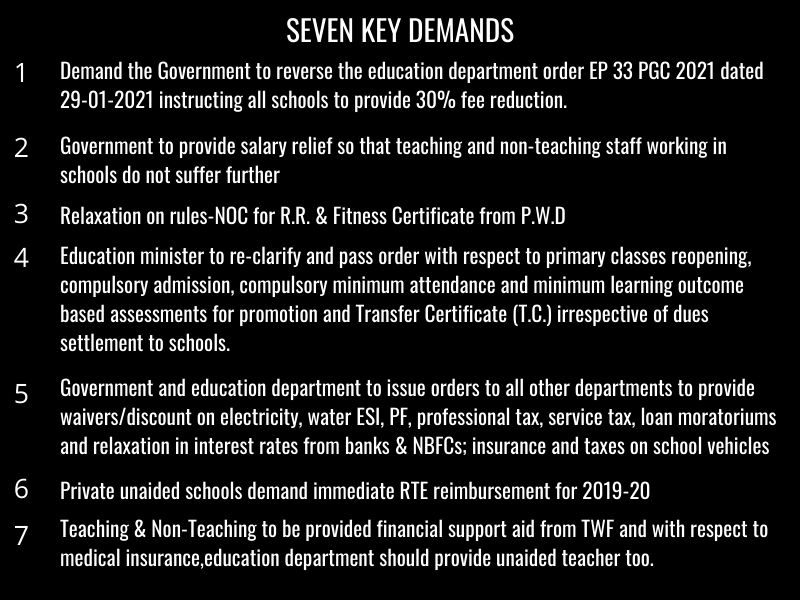