As the 31st president of the USA Herbert Hoover had once remarked, “Children are our most valuable resource.” Children are indeed the key to a brighter future, and these activists are a perfect reassurance that the future of the world is in good hands. Hailing from a wide variety of backgrounds, child activists around the world are taking up the initiative to debate and resolve several important issues affecting various aspects of our lives, from the very imminent climate change issue to youth advocacy.

Malala Yousufzai had made headlines in 2012 following a bullet injury to the head, refusing to be deterred by the retaliation and continuing her activism with greater gusto in working towards education rights and soon becoming  the youngest Nobel laureate in the world. Here are some of the brightest young minds of the 21st century willing to make a change in the world with their inspiring initiatives: The Swedish teenager created history by fearlessly voicing her disapproval at the lack of importance given to environmental issues and climate change, organising school climate strikes which culminated to an influential international movement known as ‘Fridays for Future’. Starting at the impressionable age of 15, Thunberg has left an indelible mark in international communities, going on to address various climate change conferences and summits in the United Nations and successfully establishing herself as an international environment activist. Thunberg has been awarded with multiple honours for her contribution to the activist communities, becoming the youngest ever Time Person of the Year and nominations for the Nobel Peace Prize for three consecutive times. A child environmental activist from Manipur, India, 10-year old Licypriya Kangujam is among the youngest climate activists in the world. Often referred to as the ‘Indian Greta Thunberg’, the young activist has worked towards raising climate awareness since the tender age of seven and drew national attention as she protested before the Indian Parliament house in 2019 in favour of the passing of the climate change law, drawing the attention of thousands across India. Since then, Kangujam has travelled around the world, attended several United Nations conferences, campaigned for the compulsory integration of climate change lessons in school syllabi and addressed 50 world leaders in a virtual Earth Day conference in 2020 to draw attention to the imminent climate crisis. The young climate change advocate has been honoured with multiple awards, some of which include the SDGs Ambassador Award 2019, the World Children Peace Prize 2019 and the Global Child Prodigy Award 2020. 16-year old American teenager Marley Diaz was inspired to campaign for diverse representation when she noticed at the age of 11 that all her school readings and stories featured white boys and girls. Since then, Diaz decided to begin the book drive ‘#1000BlackGirlBooks’ in November 2015 to throw light on the importance of proper ethnic representation in literature, ultimately amassing 9000 books featuring black female protagonists. The young activist also released a biographical book titled Marley Dias Gets It Done: And So Can You! in 2018 to increase awareness on the importance of representation in media especially among young readers and her efforts towards the initiative. The 23-year old climate activist from Bangladesh was inspired to tackle issues relating to climate change, child rights and violence against women. Starting from the young age of 12, Tahsin released ‘The Monthly Lal Sabuj’ newspaper to draw attention to the impact of climate change on the future generation and create a channel for children’s creative outputs. The young activist has amassed widespread support and awareness in Bangladesh on the climate front, being involved in multiple community projects such as cleanliness and recycling drives and COVID relief programmes. He was chosen to represent Bangladesh in the United Nations Youth Climate Summit in 2019 and has also been part of the Generation Unlimited launch Young People’s Action Team (YPAT). The 15-year old Indian school student is known for his marine activism. Inspired by National Geographic documentaries on plastic hazards on marine life, Kazi had organised the ERVIS foundation and project in 2018 to clean plastic wastes from ocean surfaces. The young inventor and activist has also raised awareness on the plastic problem via several conferences and media talks, also becoming one of the youngest presenters of TEDx. His ERVIS project garnered media attention, labelling him a child prodigy in designing the project aimed at cleaning and disposing of ocean waste, analysing their sources and attempting to plug pollution at its source. 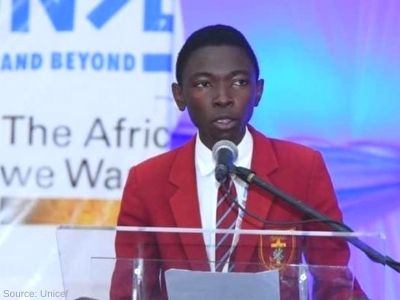 The 18-year old environmental activist from Zimbabwe has been campaigning for climate justice and youth inclusion since the age of 10. The teenage activist is known for rallying like-minded youth to advocate increased awareness about the climate crisis and ensure youth participation and inclusion in such matters. Nyathi’s contributions to society include leading the creation of the first biogas plant in his community, gaining recognition at the United Nations COP25, 2019 in actively campaigning for action against climate change and speaking at the Africa Regional Forum on Sustainable Development 2020. He has been honoured with the title of Youth Ambassador for Greenline Africa since 2014 and UNICEF Youth Climate Ambassador for Zimbabwe in 2015 and was appointed a Youth Climate Advocate in November, 2020. 17 year-old Autumn Peltier is a Canadian water activist advocating clear water for indigenous communities around the world, starting with the Aniishnabek Nation, being its ‘Chief Water Protector/Commissioner’. Often referred to as the ‘water warrior’, the teenager rose to prominence in addressing the United Nations General Assembly in 2018 on the urgency and importance of water protection. Since then, the young activist has been invited by the UN to attend World Water Week at Sweden as a keynote speaker, honoured with multiple awards including a WE Day award for Youth in Action 2016, Ontario Junior Citizens Award 2017, Young Leader Award, Ontario Municipal Social Services Association 2019 and has also been nominated for the International Children’s Peace Prize for three consecutive years since 2019.