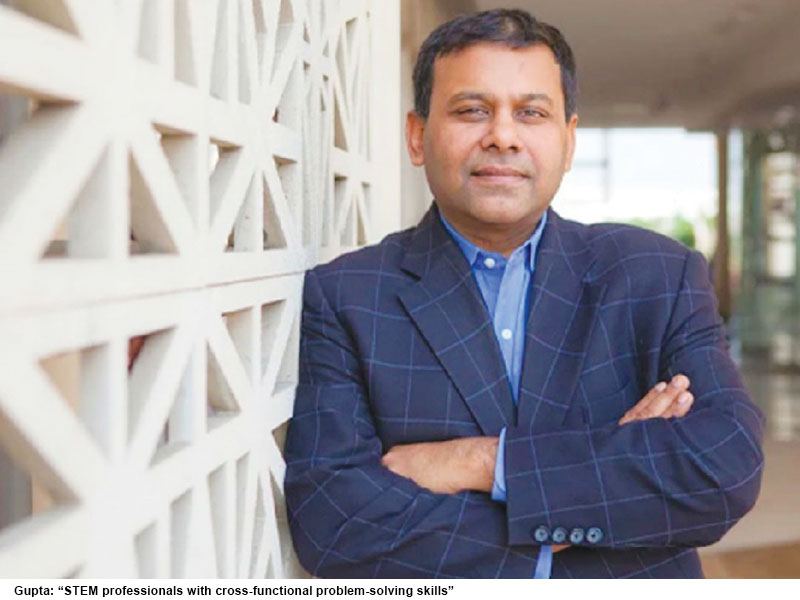 Vineet Gupta is the promoter-managing director of the Delhi-based Jamboree Education Pvt. Ltd (estb.1995), a pioneer test prep company for students aspiring to study abroad, and a founder-trustee of the highly-reputed, privately-promoted liberal arts Ashoka University (AU, estb.2014). Within a short span of time AU has risen high in public esteem and is ranked India’s #3 private university in the latest EW India Higher Education Rankings 2020-21.

Evidently, inspired by the runaway success of AU, Gupta has ventured once more unto the breach, this time to establish a state-of-the-art, globally-benchmarked STEM (science, technology, engineering and math) private varsity. Plaksha University (PU) is fast assuming shape and form in the Chandigarh Region Innovation and Knowledge Cluster (CRIKC), Punjab, which also hosts 14 reputable higher education institutions including the Indian School of Business, IISER and PEC.

Newspeg. Named after a famous tree in Indian mythology (also the origin of the mythical River Saraswati), PU has recruited its first faculty and is on target to admit its first batch of students next August.

History. A mechanical engineering grad of IIT-Delhi, Gupta took to the entrepreneurial path ab initio. Immediately after graduation, he promoted two companies which he sold for a “tidy profit” and in 1993, together with his wife Akrita Kalra, an alumna of Delhi University, promoted Jamboree Education. Since then, they have nurtured and developed it into the country’s largest test prep company for school and college-leavers preparing for admission tests (SAT, GRE, ACT, IELTS, TOEFL) of universities and higher education institutions abroad. Currently, the company which has a headcount of 450 employees, including 150 faculty, prepares 20,000 students annually in 39 centres across India, the Middle East, Singapore and Nepal for admission into colleges and universities in the US, UK and Commonwealth countries.

In 2014, Gupta teamed up with several highly-educated, successful entrepreneurs including Ashish Dhawan (Chrys Capital), Sanjeev Bhikchandani (Naukri.com) among over 140 Indian entrepreneurs and industry leaders worldwide to co-promote AU. Now the top priority of this serial edupreneur is to develop Plaksha U on the Ashoka University “collective philanthropy” model.

Direct talk. “India produces 1.3 million engineering graduates every year. But over half of them are unemployable because their foundational education is not sufficiently strong or because they are too narrowly specialised in mechanical, civil, electronics and computer sciences engineering, when the need is for engineers with multi-disciplinary skill-sets. Therefore, Plaksha University will offer reimagined curriculums that diffuse the conventional boundaries of STEM education to develop multi-disciplinary engineers and scientists well-versed in new digital technologies. The requirement of contemporary corporates and businesses is multi-skilled STEM professionals with cross-functional problem-solving skills,” says Vineet Gupta.

Future plans. The ambitious PU project has already attracted 80 donors including Neeraj Aggarwal (Boston Consulting), Hitesh Oberoi (InfoEdge), Manas Fuloria (Nagarro) among others, who have collectively raised an impressive endowment corpus of Rs.325 crore — above the phase I target of Rs.250 crore — for Project Plaksha. Gupta is optimistic about the future of this high-potential, path-breaking venture.

“It is pertinent to note that the National Education Policy 2020 has given high importance to multi-disciplinary higher education. I am confident our new syllabuses and curriculums that collapse conventional STEM boundaries will produce the inter-disciplinary scientists, engineers and leaders that India Inc urgently needs. I believe the highly successful Ashoka University model can be replicated in STEM education,” says Vineet Gupta.