Founded by Thomas Jefferson, author of the Declaration of American Independence (1766) and president of the United States (1801-1809), UVA is routinely ranked among the Top 5 public universities of America – Dipta Joshi 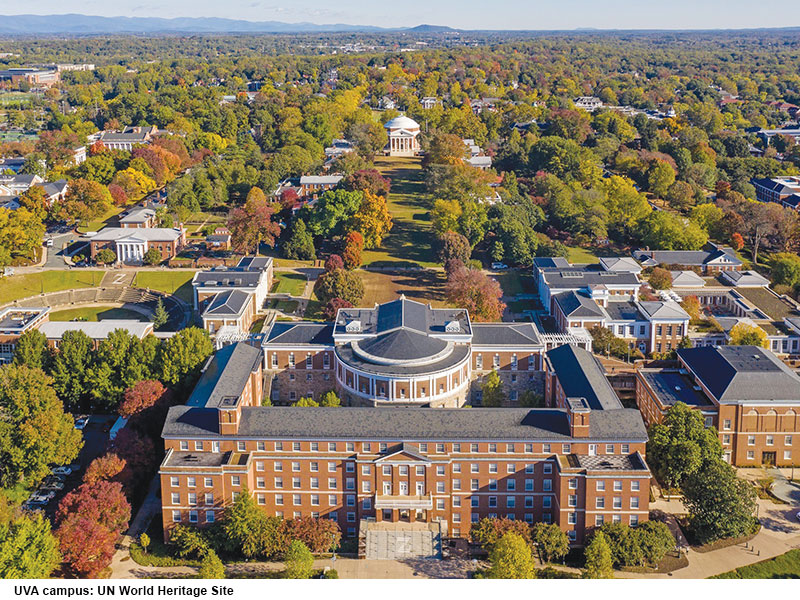 Over the past two centuries, the University of Virginia (UVA, estb.1819) has acquired an excellent reputation for teaching and research with the institution routinely ranked among the Top 5 publicly-funded universities in the US. In the 2020 edition of America’s Best Colleges of the US News & World Report, UVA is ranked #4 among public universities while the Times Higher Education World University Rankings 2021 ranks it among the Top 200 worldwide (#117).

The university was founded by Thomas Jefferson (1743-1826), one of America’s founding fathers, author of the Declaration of American Independence (1776) and the country’s third president (1801-09). Departing from established tradition of the time, Jefferson promoted UVA as a religiously secular institution of higher learning. The university’s campus layout designed by Jefferson himself, is an architectural landmark and the first varsity campus worldwide to be awarded World Heritage Site status by UNESCO.

UVA’s 12 academic schools, located in Charlottesville, offer a wide range of study programmes to 16,000 undergraduate and 7,800 postgrad students. A second campus (estb.1954) in Wise, Southwest Virginia hosts a public liberal arts college with 2,065 students. After remaining shut for over six months to check the spread of the Covid-19 pandemic, the UVA campus began in-person instruction for undergraduates on September 8.

Charlottesville. Named in honour of Princess Charlotte, the wife of King George III of England (ousted by George Washington), Charlottesville is sited on a hill overlooking the River Rivanna in Albermale County, Virginia. A picturesque town surrounded by rolling countryside and dotted with aesthetically designed buildings and historical landmarks, the city is regularly ranked among America’s most preferred habitations. Charlottesville (pop.48,457) was named as the ‘happiest city in America’ by the US National Bureau of Economic Research (2014) and featured among the ‘Top Ten College Towns’ rankings of Partners for Livable Communities.

A small but historically important habitat, Charlottesville is best known for contributing America’s three founding presidents — Thomas Jefferson, James Madison and James Monroe. Jefferson’s renowned mountain-top home Monticello, attracts a steady stream of tourists every year. Downtown Charlottesville is the legal, financial and social hub of the community, and hosts a plethora of shopping malls, cafes and restaurants. The climate is sub-tropical with hot and humid summers and cold winters. Rain falls throughout the year in Charlottesville. Campus facilities. Together with Jefferson’s home at Monticello the UVA campus is a designated UNESCO World Heritage Site. Sprawled over a 3,392-acre campus the varsity hosts 560 buildings with the central campus popularly known as the Grounds extending over 1,166 acres. The university revolves around its Academical Village, which includes the specific areas of The Lawn (a grand terraced green space surrounded by residential and academic buildings), The Gardens and The Range. The Rotunda, inspired by the Pantheon in Rome, stands at the north-end of The Lawn and is the university’s most recognisable symbol. Flanking both sides of The Rotunda and extending down the length of The Lawn are ten Pavilions interspersed with students’ residences. Each has its own classical architectural style, as well as own walled garden separated by Jeffersonian serpentine walls. These walls are “serpentine” because they run in a sinusoidal pattern.

The university’s 12 libraries host 16 million print books and 463,000 e-books with the Albert and Shirley Small Special Collections library hosting an extensive collection of Thomas Jefferson’s official and personal papers. Other campus facilities include state-of-the-art classrooms and labs, auditoriums, an art museum and gallery, a learning resource centre, two radio and a television station.

Moreover in the tradition of America’s great universities, UVA offers superb facilities for sports and games and a rich assortment of student clubs and organisations (800 clubs and 60 social service fraternities). It also has the distinction of hosting the country’s oldest debating society for undergraduate students.

Admission. Admission into UVA is highly selective with an acceptance rate of 24 percent. Minimum eligibility criteria for admission into its undergrad programmes are completion of class XII/Plus Two, proof of English language proficiency (TOEFL and IELTS tests) and SAT/ACT scores. However in light of the Covid-19 pandemic, UVA has made the submission of SAT/ACT scores optional for the 2020-21 academic year. Admission application forms should be submitted online together with academic transcripts, admissions essay and recommendations from guidance counsellor/school principal.