Newspapers and periodicals have been one of the primary media of dissemination of knowledge since the 17th century. Circulating as English pamphlets, Dutch ‘corantos’, the ancient Roman ‘Acta Dirunas’ and French ‘Journals’, the newspaper has morphed significantly over the years. As circulation of news has begun to rely more prominently on online publications, there are still certain newspapers around the world which have held their ground despite mass digitalization and the wear and tear over the centuries. Here are some of the world’s oldest newspapers still in circulation: A Swedish government daily newspaper and gazette, the Post-och Inrikes Tidningar or ‘Post and Domestic Times’ has been in circulation for over four centuries. Founded and published in 1645, it has become the oldest newspaper to still be published. Still maintaining its status as the country’s official source for public official announcements after four centuries, the newspaper publication has shifted to online-only mode since January 2007. 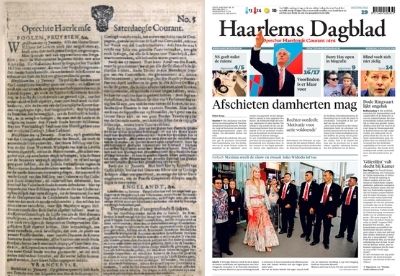 Started as a Dutch weekly magazine, the Opregte Haarlemsche Courant was first published on January 8, 1656, soon becoming a nationally read and appreciated national daily. Attaining the status of one of the oldest and most long-lived newspapers in the history of journalism, the Dutch ‘courant’ continues to be published in the 21st century, appearing as subheadings in the under the regional magazine Haarlems Dagblad’s headlines, which it was merged with in course of the Dutch occupation of Germany in World War II (1942). Started in 1664 as an independent Italian daily, the newspaper still remains in circulation in print in Italy. Published regularly, the Italian daily is now owned by Italian media conglomerate GEDI Gruppo Editoriale S.p.A. and headquartered in Mantua, northern Italy. The Italian daily has also been digitalized, new publications being accessible via its website. Widely claimed to be the oldest surviving English newspaper, the London Gazette is a daily newspaper first published on November 7, 1665 in the Oxford Gazette. Since then, the paper has maintained its status as one of the most important Government Gazettes (official journals of record) in the UK, and continues to be the oldest continuously published paper in the UK as it is currently published each weekday by The Stationary Office (TSO). The Austrian newspaper was started in 1703 as the ‘Wiennerisches Diarium’ and functioned as the official mouthpiece of the Imperial Court in Austria. Initially published as a bi-weekly newspaper, it came to be published as a daily and continues to remain the official publication of the Austrian Government for all official announcements and news. The Hildesheimer Allgemeine Zeitung is a German daily newspaper. First published on June 24, 1705 as the Hildesheimer Relations Courier, the daily still remains in circulation in print and has also developed its online presence through its official website. Founded in 1737, the Belfast News-Letter is an Irish daily newspaper which is known for being among the world’s oldest English-language dailies to still be in publication. The newspaper featured a Republican political affiliation during its inception in the 18th century, but has since adopted a unionist stance in current times. Currently owned by JP Media, the newspaper (now called The News Letter) is widely read today as one of Northern Island’s primary dailies and also comprises readership in the Great Britain and Irish Republic. The Berlingske Tidende is a Danish national daily known for being the oldest continually published paper in Denmark, the Nordic region and among the world’s oldest still-operative dailies. It was founded in 1749 by Ernst Henrich Berling -Denmark’s Royal Book Printer, and was granted official rights (till 1903) to print official news about the government with affiliations to the Conservative Party. Since then, the newspaper’s title has been shortened to Berlingske and continues to be in circulation as of 2021. Considered among the oldest continuously published daily in the USA, the Hartford Courant was established as a weekly on October 29, 1764 under the name ‘Connecticut Courant’. Founded by Thomas Green, the newspaper continued to be published as a weekly for nearly 40 years, finally becoming a daily newspaper in 1837. The newspaper has since maintained its readership and popularity, reporting regional news stories and managing the free weekly newspaper CTNow. Established in 1822, the Bombay Samachar is the oldest continuously published newspaper in India. The Bombay Samachar was founded in 1822 by Fardunjee Marzban and began publishing as a weekly till 1832 and bi-weekly till 1855, after which it was published as a daily magazine. The newspaper has grown in popularity and readership since then, and is still published as a daily in both English as well as Gujarati.