Battling financial constraints and political laxity, many of Maharashtra’s 165 night schools are on the brink of shutting down. Recording an impressive 94.08 pass percentage, a tad lower than the state’s overall pass percentage of 96.94 percent in the recent Maharashtra State Board of Secondary and Higher Secondary Education’s (MSBSHSE) Secondary School Certificate (SSC) aka class X results (June 17) for academic session 2021-22, these schools hope to outperform the state’s pass percentage next year.

Set up with the objective to bring social equity, night schools provide out-of-school adolescents and adults a platform to return to mainstream education. Offering education in Hindi, Marathi, Urdu, Gujarati, Kannada and English, these schools currently cater to approximately 35,000 students.

While night school students typically come from underprivileged backgrounds, they are self-motivated individuals passionate about catching up on their incomplete education by attending evening or night classes. Approximately 2,500 students wrote their SSC exams this year.

“Most of our students are adults who have missed completing their education for various reasons but now want to clear the class X exams since it is the minimum requirement while seeking employment. We have many women who currently work as helpers in anganwadis but are keen to clear their class X exams since it makes them eligible to apply for the post of an ‘anganwadi sevika’,” says P.S Kadam, principal of Mumbai-based Nanaware Night High School.

Despite their role in making society more equitable, the number of night schools in the state has dwindled from 210 schools a decade ago to just 165 today as policy makers neglect the segment – a 10-member committee set up by the state’s education minister, Varsha Gaikwad in January 2022 to look into the various issues troubling night schools is yet to convey its first meeting.

In 2015, the government’s decision to shift its surplus day-school teachers to the state’s night schools resulted in teachers being appointed without taking into consideration their subject expertise. The matter only exacerbated when a 2017 notification barred the state’s school teachers from taking up more than one teaching job. This meant many day school subject teachers who taught at night schools after their regular jobs couldn’t do so anymore. With no regular teacher and staff recruitments taking place since 2012, most schools no longer have security and support staff.

“Night schools were never meant to be profit centres but now it has become increasingly difficult to run without a loss. Night schools spend on hiring external teachers and pay rent to the government if operating from municipal schools. Annual fees including exam fees etc. in night schools are as low as Rs 364 for class X students. So, though school managements are interested in providing this service, how long these schools will continue will depend on how deep the school managements’ pockets are,” says Sunil Susare, head master, Bhaisatta Night School, Ahmednagar.

Despite the apathy, night schools in the state have been posting improved results year-on-year.  From 84 percent in academic year 2019-20 to this year’s 95.59 percent – the highest ever achieved in pen-and-paper exams, night schools’ consistent performance makes a compelling case for the government to establish more such schools.

“Most night school students have full-time jobs and can only afford to study for a few hours a day. However, the fact that they have performed almost at par with regular day students despite their time constraints and setbacks shows there is no dearth of intelligence or commitment. With a little more flexibility in policies and handholding by the government, we could see the number of students completing their basic education grow manifolds,” says Nikita Ketkar, founder, Masoom Education Org (estb.2008), a nonprofit working in the adult and night school space.

Asking the state government to have a more empathetic view of night schools, especially after the pandemic, school managements want the government to provide pension for night school teachers, provide textbooks, course materials, promote hybrid education and as an incentive, absolve schools from paying rent. “The night school teachers who were canvassing in my area convinced me to join the school and clear my class VII, IX and X exams. They used to praise me for my neat handwriting. I don’t believe age should be considered an issue when it comes to gaining knowledge,” says the energetic grandmother of six. “I decided to study when both my sons cleared their SSC exams four years ago. I now want to complete my higher secondary school certificate (HSC) exam and graduation too. I want to do it to bring awareness about the importance of education. My caste does not give much importance to education but I hope to inspire others,” says Ramappa. 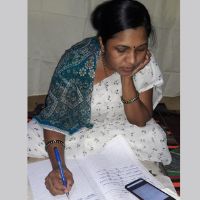 “My husband lost his job during the pandemic. I wanted to clear my class X exams for better job prospects. I used to wake up at 4 am everyday to study for three hours. I really enjoyed studying and had set a target of achieving 80 percent in the boards,” says Thorat who is now determined to study further and earn her degree. “My husband was keen that both he and I clear our class X exams to inspire our children. I am glad all three of us could clear the exams in the same year despite having very little time to study. I succeeded because of the efforts put in by my teachers at the school and the extra 30 minutes of time given to complete the paper,” says Vaishali.