We’ve all heard the old adage “Laughter is the best medicine”. A study reveals that laughing for 10 to 15 minutes a day can burn up to 40 calories approximately. It is also said that a person who laughs a lot has a healthier and a happier life and also lives longer. With the steady rise in lifestyle related diseases and stress, laughter is found to be the best medicine for the old and young alike. Hence laughter clubs, stand-up comedy shows, and laughter yoga have been able to attract so many fans from across the world and May 5 is celebrated as World Laughter Day today. The World Laughter Day was incepted in 1998 by Dr. Madan Kataria, founder of the worldwide Laughter Yoga movement. Dubbed as the “Guru of Giggling” by the London Times, Dr. Kataria began the Laughter Yoga Clubs movement way back in 1995. He was inspired to start the movement by the facial feedback hypothesis, which suggests that a person’s facial expressions tend to have an effect on their emotions. Started with only five people in a public park in Mumbai in 1995, this laughter yoga club is present in over 108 countries today with thousands of free social laughter clubs. Dr. Kataria says, “Laughter yoga is the culmination of the breathing exercises such as Pranayama and the laughter exercises. It involves breathing, stretching and laughing.  This form of a unique exercise gives more oxygen to the body and brain. All of this began way back in 1995, while I was dealing with stress. I realised that laughter can help people cure from stress, but however no one was laughing. Eventually I developed these exercises, and today there are around 3.5 million people across the world who engage in laughter yoga.”

According to Dr. Kataria, laughter yoga is a simple, cost effective form of exercise to reduce stress, strengthen the immune system and oxygenate each and every cell of the body. If one laughs every day, they will not fall sick easily and if incase one has chronic health issues, it will heal faster.

Research shows laughter helps people strengthen their immune system, boosts their moods, and protects the people from the damaging effects of stress and also improves their cardiac health. Laughter can also help a person tone his/her abdomen muscles. Laughing helps the muscles in the stomach expand and contract, by way of which they are toned. 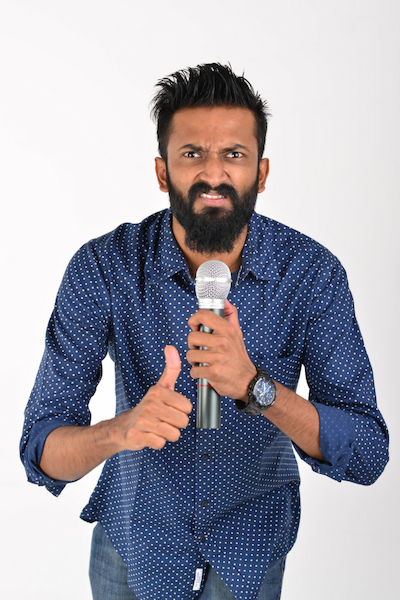 “Laughter is a strong medicine. We have found it extremely beneficial in drawing people together for exercise. A good, hearty laugh along with yoga leaves the muscles relaxed for up to 45 minutes. Laughter is said to lessen the physical tension in our bodies. In fact we have 225 laughter yoga clubs in Bangalore alone and around 480 laughter yoga clubs in Karnataka. Many people benefit from practising laughter yoga and many women participate in this regime. People forget their pains and come to these sessions for some good laughter and workout. Also, it is a
great cure for so many people dealing with stressful lives,” says Professor Sadashiv Reddy, president of the Karnataka Laughter Yoga clubs.

Laughter in our country has reached many audiences through stand-up comedies, which is a live stage performance where a solo artiste engages the  audience through his jokes and humour often derived from his/her own experiences. Satish Perumal, a Bangalore-based stand-up comedian who is an alum of the Bangalore-based Commits (Convergence Institute of Media, Management and Information Technology Studies) with six years’ work experience in the advertising industry, says, “I think that stand-up comedy is one of the best professions a person can be in. It is great to have people forget their stress/pain for one or half hour because of our comedy/jokes that are mostly inspired from real-life events. World Laughter Day is a welcome reminder that it is best to keep laughing and that life is not just about work deadlines. One should see the brighter side of life and the best way to do it is through laughter.”