The welcoming charm of Indonesia

With its clean sandy beaches, tropical terrain and well-developed culture, Indonesia is ideal for rejuvenating holidays. What it lacks in terms of economic progress, it compensates with exotic locales, mild climate and cultural affinity with Indian visitors. 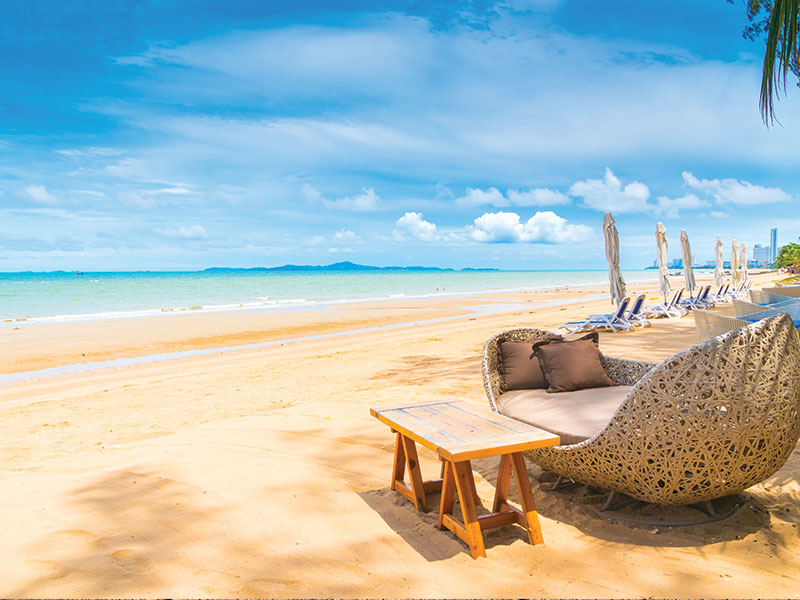 With the decline of service culture and sky-high hotel room prices in the West, the clean, neat and infrastructurally well-equipped high-growth nations of south-east Asia and ASEAN (Association of Southeast Asian Nations) have emerged as the preferred hot spots of leisure travellers around the world. During the past two decades, Singapore, Malaysia, Philippines and Thailand with their thriving economies have earned good reputation as safe and exotic getaways with opportunities for excellent shopping and extra-curricular activities. Although not quite in the same league in terms of economic progress, what Indonesia (pop. 264 million) lacks in terms of development, it compensates with exotic locales, mild climate and cultural affinity with Indian visitors.

The island of Bali, although set within an officially Islamic republic, maintains its strong cultural association with its Hindu past and offers pretty beaches, tropical terrain and exotic culture ideal for rejuvenating holidays, especially for Indian travellers.

The name Indonesia has its roots in two Greek words: Indos meaning Indian and nesos which means islands. Strategically located between the mainlands of Asia and Australia, Indonesia comprises a necklace of 17,508 islands stretching 5,150 km, of which only about 6,000 are inhabited. Six main islands — Java, Sumatra, Bali, Kalimantan aka Borneo, Sulawesi aka Celebes and Irian Jaya aka Papua — and 30 smaller archipelagos contain the majority of the population.

Indonesia’s history goes back to the fossil era of the Java Man. Fossils discovered by Dr. Eugene Dubois in 1809 near Trinil village in East Java are estimated to be about 500,000 years old. This discovery proves that the region had been inhabited since several millennia. Major migration patterns from China and Tonkin to the Indonesian archipelago have been traced as far back as 3,000-500 BC. These migrations introduced new Stone, Bronze and Iron Age cultures as well as the Austronesian language into the archipelago. By about 100 AD Indonesia had come under the influence of the mighty Hindu kingdoms of south India and later of the powerful Srivijaya Buddhist kingdom during the seventh century. The spectacular Borobudur Buddhist sanctuary was built in Central Java by the Srivijaya kings. The 13th century witnessed the rise of the powerful Majapahit Hindu empire in East Java, which united the whole of what is latter day Indonesia and parts of the Malay peninsula for over two centuries. As in all Hindu empires, the Majapahit kings built several grand temples in Java including the Prambanan temple complex near Yogyakarta, the Penataran temple complex in East Java and several ethereal shrines on the Dieng Plateau. The prosperity of the archipelago attracted plundering Mongol armies led by Kublai Khan in 1293 AD, but he was badly defeated and driven back. Later during the 14th century visiting Arab traders and merchants laid the foundations for the gradual spread of Islam in Indonesia. However it took until the end of the 16th century for Islam to replace Hinduism and Buddhism as the dominant religion of the archipelago.

In 1292, Marco Polo became the first European to set foot on the islands, followed by the Portuguese who established spice trading posts here in 1509. As in Sri Lanka, the Portuguese soon monopolised and controlled the spice trade route with Europe until the mid-16th century, when the Dutch took over and remained in power for 350 years.

During the Second World War the Japanese usurped control from the Dutch and ruled Indonesia for a short period of about three and a half years, until Japan’s surrender which marked the end of World War II. A Dutch attempt to regain control resulted in a resurgent independence movement led by Bong (big brother) Sukarno. The United Nations brokered a truce and both parties signed an independence agreement on December 9, 1949 following which Sukarno was sworn in as the country’s first president. For Indian visitors, Jakarta (pop. 9.61 million), the capital, is likely to prove reminiscent of Mumbai and New Delhi, although it is less crowded. The city has a fascinating history. Recent history records it as a small harbour town called Sunda Kelapa, but its origins date back to 1570 AD when it was named Jayakarta by Prince Fatahillah of the neighbouring Sultanate of Banten. The name Jayakarta or ‘City of Great Victory’ was later changed to Batavia under the Dutch. Now rechristened Jakarta, and the centre of government and business, it is spread over an area of 661.5 sq. km.

Indian civilizational influence is very much in evidence in Jakarta: restaurants and shopping establishments named after characters in Indian mythology, an airline named Garuda and statues of Ganesha and Lord Shiva are commonplace. Ethnic crafts and art extensively portray Indian mythological characters. The city’s arterial road — Jalan Sudirman displays a magnificent sculpture of Krishna and Arjuna debating the ethics of karma or duty as depicted in the Mahabharata. While there is a rich cultural heritage that India has bequeathed Indonesia, there is little contemporary influence. The only signs of modern India in this country are hyper-polluting Bajaj autorickshaws.

Nevertheless ex facie Jakarta is a modern city, replete with skyscrapers and an excellent road network where flashy cars and bikes zip by in abundance. But while Jalan Sudirman rivals the best high streets of Malaysia and Singapore, the rest of the city pales in comparison. However it’s indicative of the country’s high literacy (98 percent) that road discipline and orderliness is exemplary by Indian standards. Vehicular traffic is smooth, silent and fast moving and motor horns are used only in emergencies. Moreover hotel rooms, government offices, shopping malls, cars, buses and trains are air-conditioned against the city’s sweltering year round climate (26-33 degree celsius).

The public transport system is excellent and supplemented by ojeks or ubiquitous chauffeur driven scooters. Ojek riders hang out in groups at most street corners and their “Ojek, boss?” solicitations are heard all over the city. Surprisingly, despite Indonesia’s reputation as an orthodox Islamic society, in Jakarta women dress fashionably and seem far more secure on the streets than their counterparts in India. It’s common for women to ride pillion on ojeks, even late at night.

Among them Taman Mini Indonesia Indah (TMII) or ‘Beautiful Indonesia in Miniature Park’ is perhaps the most popular. TMII displays Indonesia’s varied cultures, artefacts, ethnic clothing and products in its halls. A sky lift cable car offers visitors a bird’s eye view of the country’s map set in a manicured water plantation below. Ancol Beach in north Jakarta is a popular hangout, where people swim, fish, sail, ride motorboats or just laze on the beach. The Museum Komodo shaped like a Komodo dragon — the only prehistoric giant lizard found exclusively on Indonesia’s Komodo Island — exhibits dioramas depicting the fauna of the region.

Excursions. There’s an interesting range of day and weekend escapes ex Jakarta. The more popular are: Bidadari Island (30 km), connected with the mainland by motorboat where deep sea diving is a popular sport and Kepulauan Seribu aka Thousand Isles National Park (40 km), set in azure oceanic waters and accessible by sea from Ancol beach. This capital city of west Java offers the quintessential Indonesian experience. Bandung (pop. 2.57 million), is a three-hour train journey from Jakarta through rugged terrain, verdant vales, emerald fields and bamboo thickets ringed by rolling hills. Its romantic setting has earned it the sobriquet of ‘Paris of Indonesia’, which means that nights are longer than the days, and more adventurous.

The most unique attraction in Bandung is Tangkuban Parahu, the smoking volcano, where one can stand on the very edge of the crater and behold great clouds of vapour billowing skyward. Enterprising businessmen have built resorts and spas which offer hot baths into which rejuvenating spring waters are piped for convenience of visitors.

Bandung is also a starting point for several adventure activities such as trekking, biking, skydiving and wild boar hunting. Motorcycle racing is a popular sport with Saturday nights reserved for street races. Local mafias cordon off main roads after 11 p.m for bikers to strut their stuff at hair raising speeds, while small fortunes are made and lost in equally fast and furious betting.

Alun Alun or the town square is a popular meeting point and hangout in Bandung where groups of men and women congregate until the wee hours. Crowds are especially large on Wednesday nights, when The Legends — a rock band which imitates the music and style of the Rolling Stones — performs at the Rumput Cafe. The cafe is virtually a hole in the wall but with beautiful interiors.

It’s evident that music is a way of life — street life — in Indonesia and more so in Bandung. On every street corner children and youth set up with guitars and drums offering entertainment to commuters in exchange for a few coins.

Ditto at traffic junctions and in food joints where boy bands are ubiquitous. Soliciting, but they have style and work hard at making their music popular and appealing.

Excursions. Bandung is conveniently located in mid-west Java and serves as a good base camp for weekend sorties. Among them: Batu Tulis Ciaruteun (9 km) hosts a Sanskrit inscription, a relic of the Tarumanegara kingdom dating back to 450 AD. To reach this protected site one has to trek for about 2 km through verdant jungle.
Panaitan Island sited about 45 km off the coast of

Bandung is part of the Ujungkulon National Park. The island’s rugged coastline offers a thrilling diving destination for amateurs and learners.

The Citarik River (50 km) has a gentle 16 km kayaking stretch before it starts plunging through volcanic gorges and jungle. It is often used as a training stretch for amateur kayak enthusiasts. The best time for adrenaline thrills is during the rainy season, October-April. The island’s most popular tourist attraction Bali Barat National Park — is on the western coast and sprawls over 10 percent of its total land area. Encompassing mountainous terrain, mangrove forests, savannah grasslands and coral islands, it is the last refuge of one of the most endangered bird species of the world: the Bali Starling. The peninsular Prapat Agung with its extensive network of walking trails is the most accessible part of the park. Here at Tegal Bunder you will find the Bali Starling Recovery Project where scientists are trying to breed and reintroduce this exotic bird into the wild. 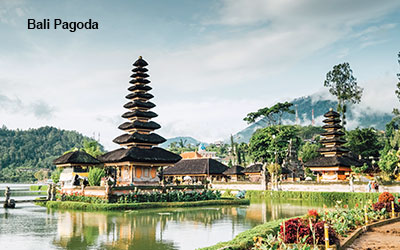 The Besakih aka Mother Temple of Bali at the base of Mt. Agung is a historic must-visit site on the island. This 1,000-year-old temple is revered as the most sacred of all Balinese temples.

For visitors from India the Pura Jagatnatha temple dedicated to the supreme God Sang Hyang Widi Wasa which enshrines the statues of a turtle and two dragons, is likely to prove especially interesting.

Excursions. Bali’s palm-fringed Sanur Beach is a popular recreation site dotted with hotels, restaurants, shops and other tourist facilities. Sited close to the island’s capital city Denpasar, the beach is well connected by public transport. Menjangan Island, off Bali’s west coast, is famous for snorkelling among beautiful coral reefs and a wealth of tropical fish inhabiting the waters around it. Moreover the island, including Terima Bay, is worth visiting for its soothing, sweeping vistas.

Air. There are over 30 airlines offering flights to any port in the country at very low prices as the competition is intense.

Rail and road. Indonesia has an extensive train network linking cities on Java island and a small rail network in Sumatra. Frequent buses ply between all cities throughout the country.

Sea. Being an archipelago, numerous ferries and boats operate between islands for the convenience of travellers.